To celebrate the 50th Anniversary (technically the 51st anniversary now) of Gigan’s theatrical debut, Tamashii Nations has announced their S.H. MonsterArts Gigan. The figure has movable wings, and an added torso cut for additional articulation. The figure stands at 6.3″ tall. It’s based on Gigan’s debut in Godzilla vs. Gigan, which was released in 1972 in Japan.The film featured Godzilla and Anguirus taking on both Gigan and and the returning King Ghidorah.

In Japan, the Gigan figure will be a Premium Bandai Web Exclusive. Pre-orders begin January 13th in Japan. The figure is priced at 12,100 Yen (about $93 USD), and is due for release in July. You can see additional photos after the jump. 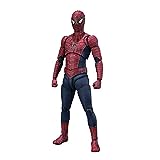